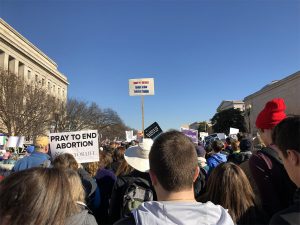 Schenectady’s Cameron Kiser was astonished by the big crowd at Friday’s March for Life in Washington, D.C.

“It was just amazing to see so many people come out for one cause,” said Kiser, 18, a senior at Notre Dame-Bishop Gibbons High School in Schenectady. “I’m definitely proud to be part of something so big.”

About 200 people from the Capital Region were among the thousands who participated in the 45th annual march, an anti-abortion rally always held around the anniversary of the 1973 Roe v. Wade decision — a decision that recognized a legal right to abortion.

The 17-student Notre Dame-Bishop Gibbons delegation left Albany late Thursday night on a Yankee Trails charter bus and arrived in Washington on Friday at about 6:30 a.m.

The schedule included a youth rally and Mass; a visit to the National Mall; a televised speech by President Donald Trump; in-person speeches by people such as House Speaker Paul Ryan and Pam Tebow (mother of athlete Tim Tebow); and the afternoon march up Constitution Avenue to the Supreme Court and Capitol buildings.

“It was my first time being in something like this,” said ND-BG sophomore Joey Tortello, 16, of Albany, in a cellphone interview from the bus as he and other marchers prepared for their return to Albany.

Tortello liked Trump’s speech, in which the president said his administration would always defend the right to life. “I thought it was awesome, just to see him speaking live,” Tortello said. “It was really cool and what he said was really awesome.”

Some ND-BG parents also made the trip. Mike Marrone of Johnstown marched with sons Jacob, 17, a senior, and Ethan, 15, a sophomore. Daughter Julia, 18, who graduated from the high school in 2017 and is now a freshman at Fulton-Montgomery Community College, also was on the family team.

“Obviously the youth are the future,” Mike Marrone said. “If you get them involved, it’s going to better the cause of the anti-abortion movement.”

“These are kids who made a really long trip to stand up for something they believed in, not just as Catholics but as citizens of the world,” said Mary DeTurris Poust, director of communications for the diocese.

Tatianna Myers, 18, who also graduated from ND-BG in 2017 and now attends the College of St. Rose in Albany, said she marched last year and loved the atmosphere.

“I wanted to come again and get more voices heard,” she said, adding she believes those voices will be heard. “With more people posting about it on social media, everyone had their cameras out and you could see a lot of people taking pictures and making it known they were there.”

Kathy Tobin of Schenectady, a guidance administrative assistant at ND-BG and a trip chaperone, said school representatives have participated in past marches.

“We just wanted them to experience seeing other youth, so many standing up for life, and see other youth be on fire with the Catholic faith,” Tobin said.

“It was a really good experience to see everyone come together and stand up for what they believe in,” said Schenectady’s Nicholas Mendonca, 13, an eighth-grade student. “I just believe abortion is not right to do. I felt it was right for me to come and express my opinion with my friends.”

“It was emotional for me,” added Juliana Tortello, 14, a freshman. “I never saw anything like this before with everybody coming together.”